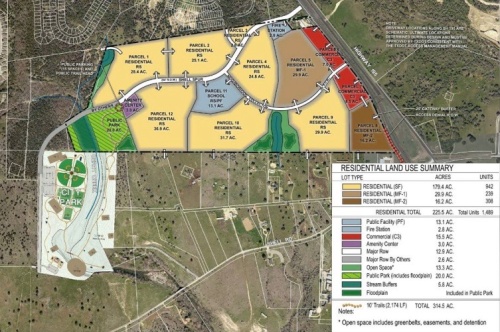 A conceptual map of the Berry Creek Highlands PUD along SH 195 in north Georgetown shows plans for residential, commercial and municipal development.

Here are some things to know this week.

Georgetown City Council unanimously approved rezoning last week for a planned unit development along SH 195 that will be called Berry Creek Highlands. The PUD, which includes about 314 acres of property, will include single-family and multifamily residential as well as high-density commercial areas, according to city documents.

Up to 1,500 residential units can be built in Berry Creek Highlands, and the development will also include sites for public facilities, such as a fire station, a park and a new Jarrell ISD elementary school.

Along with the PUD, the council also approved the creation of a municipal utility district for Berry Creek Highlands. As part of its agreement with the city, developer Avanti Strategic Land Investors will contribute money to municipal improvements near Berry Creek Highlands, including a wastewater line extension, an elevated water storage tank and transportation improvements on Shell Road and SH 195, according to city documents.

The north segment of the new Southwest Bypass will open to traffic for the first time Wednesday following a 9 a.m. ribbon-cutting ceremony. The north portion of the bypass includes 2.4 miles of roadway between West University Avenue and Leander Road. Construction on the $18.3 million project began in 2016. A south segment to further extend the roadway to the southbound I-35 frontage road is anticipated to finish by late 2019. Read more here.

Well over 100 people attended a Georgetown City Council meeting last week to ask for reconsideration of a master plan for San Gabriel Park that includes the removal of the park’s rodeo arena and show barn. The arena has for decades been home to the Williamson County Sheriff’s Posse rodeo, which held its 75th annual rodeo in San Gabriel Park last month. Read more here.

Offices of the Williamson County Tax Assessor-Collector will close on a rotating basis this week for staff training, according to the county. The office in Georgetown, located at 904 Main St., will close Wednesday.

The board of regents for The University of Texas voted last week to give the U.S. Army space in the UT System building at 210 W. Seventh St. in downtown Austin for the Army to open a new Futures Command center. Army officials say the center will focus on military innovation and modernization. The facility is expected to bring about 500 jobs to the Central Texas area, including workers from inside and outside the military.