Here are the bars and restaurants coming soon to Central Austin The list of coming attractions includes Wanderlust Wine Co., a winery, wine bar and tasting room coming downtown in spring 2020, and a second location of MezzeMe Turkish Kitchen on the drag coming this fall.

Wanderlust Wine Co.
Wanderlust Wine Co. will open in spring 2020 at 610 N. I-35, Austin. Owner Sammy Lam is a native of McAllen, Texas, who fell in love with wine while studying abroad in 2011. Lam hopes the winery, wine bar and tasting room will help get people excited about wine and be a starting point for those who want to learn more. 956-212-7848. www.wanderlustwineco.com

The Kebab Shop and Gyu-Kaku
Two new tenants are coming to Plaza Saltillo, the forthcoming mixed-use development: The Kebab Shop, a family-run chain out of California, will open its second Austin location in early 2020. Gyu-Kaku, a Japanese barbecue chain based in Tokyo, will open its seventh Texas location; an opening date has not yet been announced. Addresses are not yet available. www.thekebabshop.com, www.gyu-kaku.com 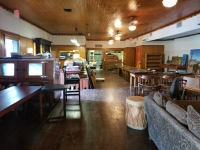