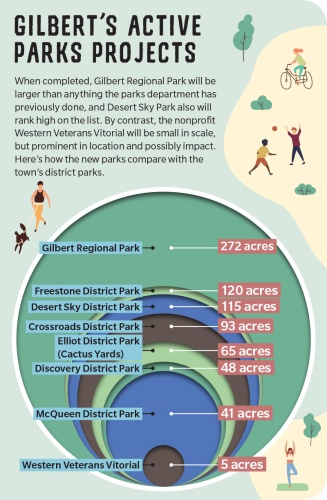 When completed, Gilbert Regional Park will be larger than anything the parks department has previously done, and Desert Sky Park also will rank high on the list. By contrast, the nonprofit Western Veterans Vitorial will be small in scale, but prominent in location and possibly impact. Hereu2019s how the new parks compare with the townu2019s district parks.

Two giant public parks—which combined are large enough to fit all of Gilbert’s completed district parks inside them—remain under construction with an anticipated opening this fall, giving Gilbert’s south side its first substantial public amenities.

Meanwhile, a third park, this one much smaller and from a nonprofit, is slowly churning toward opening near the town’s civic center with organizers hoping to make an equally large regional impact.

Each park will offer residents something a little different.

Gilbert Regional Park is a massive 272-acre park that caters to families with play structures and amenities from public-private partnerships. That starts with the recently announced The Strand @ Gilbert water park, an addition that town officials said filled their inboxes and lit up their social media.

Desert Sky Park will aim at sports enthusiasts, and together with the recently opened Cactus Yards at Elliot District Park, help fill the town’s need for additional athletic fields.

The Western Veterans Vitorial, formerly known as Welcome Home Veterans Park, will be much smaller at 5 acres and is not a publicly run park, but the nonprofit that is working to have it built has planned a number of amenities to honor those who have served the country in the military.

“There are always things to talk about with the new parks,” said Robert Carmona, Gilbert Parks and Recreation interim director. “There’s no shortage of things going on.”

The biggest of the three parks is Gilbert Regional, which sits on 272 acres, 47 of which were a “high-and-dry” area owned by the town. The rest is a flood control plain acquired from Maricopa County. It brings a public park to south Gilbert, the area’s first.

One of the characteristics of the area is the “abundance of dirt” on-site, and the town has planned the first phase with that in mind, Carmona said. The town is removing what needs to be removed for the flood-control plain requirements, and some will be used in the park.

“Instead of having a park that is completely flat, you’re going to have a lot of topography within it,” he said. “You’ll have ridges and vistas and overlook points.”

The Mountain, the park’s playground, uses that dirt. It and a 6,000-square-foot splash pad are part of Phase 1, set to be completed in September at a cost of $17 million.

Phase 1B will bring in an amphitheater with an event lawn and tennis, pickleball, basketball and sand volleyball courts. That part is still under design but set to open in summer 2020. The cost will be known when design is finished.

“It’s just a place where Gilbert can finally come into its own when it comes to hosting regional events besides just giving our residents a place families can go and enjoy,” said Parks and Recreation board Chairman Les Presmyk, a former Town Council member.

The Town Council’s approval of a 50-year lease, plus three 10-year options, Feb. 21 for The Strand @ Gilbert renewed excitement and curiosity about the new parks, officials said.

“I think you just have an overwhelmingly excited population within Gilbert that is looking for an additional family amenity that also will be a great economic impact tool for the community,” Carmona said.

The Strand will be built at a cost of $35 million—none of it paid for by the town—on 25 acres of the high and dry part of the park. Gilbert subdivided that area into three parcels and put out requests for proposals on them.

“It’s a passion project for John (McLaughlin, president) at The Strand, and things just lined up well because he made a home in Gilbert and wanted to pursue something like this, and we just happened to be putting RFPs out,” said Rocky Harris, Gilbert Parks and Recreation business manager. “It really came together very nicely.”

The park will be built on three lakes, have a system to allow surfboarding and wakeboarding, a restaurant, beach, cabanas and more. Carmona said the town expects it to be a regional draw for families and also attract inland surf and wakeboarding competitions.

It also could be a draw for the remaining 5-acre and 10-acre parcels. The RFPs are out on those now and will be reviewed in April, Carmona said.

The plan for the first 30 acres being developed in Phase 1 is four multipurpose fields. Once the other 85 acres come online in the coming years, it will hold up to 16 fields where soccer, football, lacrosse and other sports can be played.

More youth-sports fields has been a long time coming, according to Presmyk.

“In 1999 when I first got involved [on council], we had a shortage of playing fields—baseball, football, soccer,” he said. “We worked very hard to try to alleviate that. That’s been an ongoing and constant demand in the town of Gilbert. [Desert Sky] will give us some relief from that. It won’t satisfy the pent-up demand, but it will help.”

The development of the rest of the park acreage has no certain timetable at this point, Carmona said. It is on the capital improvements project list for 2024, but the timeline is flexible.

The recently rebranded Western Veterans Vitorial is another passion project, this one for a Gilbert-based nonprofit group, Operation Welcome Home AZ, that puts on ceremonies for veterans settling in or returning to the state after leaving the service.

The rebranding also reflects an effort to make the park regionally significant for the Western United States, board President Annie Remsburg said.

Funds are being raised privately to build the park, which sits adjacent to the town’s Public Safety Building, with an original estimate of $3 million to complete the project, though a revised figure is expected soon.

The group is starting a national capital campaign this spring selling inscribed bricks for a plaza out front. Donations can be made to https://welcomehomeveteranspark.org/donations.

While the project was first announced in 2015, work did not start until April 2018. The Arizona National Guard’s 3rd platoon of the 258th Engineer Company then performed preconstruction earth and site work as part of itse training.

The next step will be building a perimeter fence, Remsburg said. While the work will happen in phases, the park will not be open to the public until it is complete because of the nature of the grounds and construction work.

Because it is paying for the park as it goes, Operation Welcome Home cannot give an estimate on its opening. It is all dependent on how quickly the money comes in.