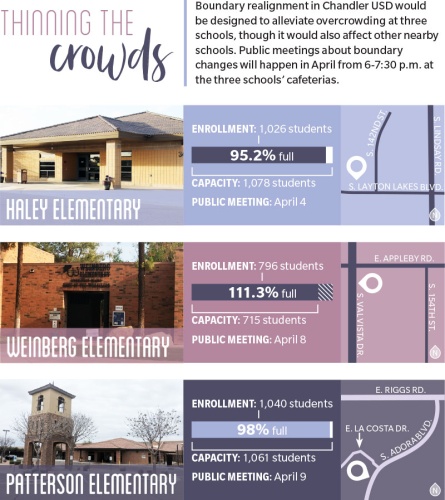 Boundary realignment in Chandler USD would be designed to alleviate overcrowding at three schools, though it would also affect other nearby schools. Public meetings about boundary changes will happen in April from 6-7:30 p.m. at the three schoolsu2019 cafeterias.

Chandler USD will seek input from its schools’ families in April as the district moves to stay ahead of school enrollment in the southern area of the district.

Dubbed by Chandler USD as the Val Vista corridor, the area is the last growing area in the district, CUSD Chief Financial Officer Lana Berry said. It includes the east Chandler, south Gilbert and west Queen Creek areas of the district, with the growth happening particularly along Val Vista Drive in Gilbert.

“This is a big thing for us,” Berry said. “We have 5,000 square feet (of district facilities) that we’ve just got to maintain and keep up, and we’re on our last little bit of growth along the Val Vista corridor.”

The district and an outside demographer used the expected number of households coming in and the typical number of district students per household in the area to estimate future enrollment growth. The work yielded an estimate of about 975 additional K-12 students in the coming years, officials said.

Berry said the district plans to open a school in the area in July 2020, though land has not been purchased, and construction would depend on voters approving a bond.

The district has come up with various attendance boundary realignment options, including one that involves Haley, Weinberg and Ryan elementary schools, and another involving Auxier, Patterson and Riggs elementary schools.

“What we know is that Haley really doesn’t have any relief if we have the current boundaries,” Assessment and Research Director Amber Stouard told the Chandler USD governing board during a Feb. 27 work study session. “They’re going to continue to be a very large school.”

She contrasted that with Ryan, which enrolls about 700 students. However, that includes students enrolling there because Ryan is a satellite campus for the district’s gifted program. The number of district students living within Ryan’s boundary is 528.

One option would return a section of Haley’s attendance zone back to Ryan, giving Haley some relief, Stouard said.

Another option would move the Seville community from the Patterson zone to Riggs, but Stouard said that might make Riggs too big. That led the district to consider an alternative that would take a square-mile chunk with low-density housing from Patterson’s zone and move it to Riggs.

Additionally, Weinberg’s attendance zone includes undeveloped land, leading to some concern about its future growth. Relieving Haley now would allow some pockets of the Weinberg boundary to eventually be moved to Haley, Stouard said.

The options will be presented to community members at three public meetings in April. Elementary Instruction Assistant Superintendent Frank Narducci told board members that district staff may generate more options before the meetings and expects more to come out of them.

Narducci stressed that the district would accommodate students who want to remain at their same school despite a boundary change.

The district would also honor open enrollment requests, as required by state law, and help with busing options.

“[The boundary-change process] is very family-friendly,” Narducci said. “We know when we go to the public meetings and talk to them about their options, it helps them now focus on ‘don’t fear it, let’s discuss it.’”

The district is also looking at expanding its gifted student services on the eastern side of the district. The district has Knox Gifted Academy on the west side.

Knox was turned into a gifted academy in 2012 after years of declining enrollment. Berry said Knox has a waiting list of 350 students because it is at capacity.

Narducci said the district is looking at options for where to place an east-side gifted academy.