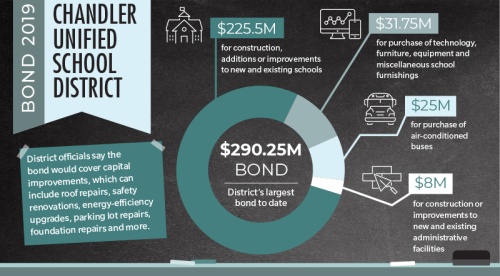 Chandler USD will ask voters in November to approve a $290.25 million bond to make improvements to its 44 existing schools and add an elementary school and a high school to the district.

The bond is the largest sum of money the district has gone to voters for to date, but according to district officials, it is necessary to accommodate increasing enrollment and aging facilities. The district last passed a bond in 2015 for about $196 million.

CUSD Chief Operating Officer Lana Berry said if the bond were to pass, it would not increase property taxes for residents. Instead, she said the rate would remain approximately the same at $1.28. She noted that if the bond were to fail, residents would see a decrease, but eventually, the district would need to ask voters again for assistance, likely at a higher premium to taxpayers.

CUSD is the second-largest district in Arizona, with more than 46,000 students and more than 900 acres of district land—which shakes out to about 5 million square feet of school space, according to district officials.

Berry said it is easier to think about the size of the district in terms of housing. The district’s 5 million square feet of school space is equivalent to about 2,500 homes, Berry said.

“For us to maintain our 5 million square feet and not take away from our operating funds, which pay for teacher salaries and for staff and for programs, we have to take care of our facilities using bond dollars, and that’s important,” Berry said. “So half of this bond is to maintain our current facilities, [and] a portion of it will be to build two new schools so that we have seats for kids and we are ready to meet those needs of kids and our communities. But the other portion is to maintain these schools, make sure they are 21st century-ready, make sure they have technology and make sure we have buses that can get [students] there.”

Breaking down the bond

With projected enrollment growth in the Val Vista corridor—the part of the school district servicing Gilbert and Queen Creek—and existing sites already at capacity, Berry said it is necessary to spend money now to build the two new schools in order to ensure students have seats in their neighborhood schools and that teacher-to-student ratios stay low. Berry said the district projects additions of 300 students a year for the next several years.

Berry said the bond is also necessary to maintain the district’s existing campuses—70% of the district was built in the last 20 years. Those structures will require more maintenance as they age, and will require updates to continue to meet the needs of the students.

Construction and land costs for the district’s new high school will total about $35 million. Elementary No. 31, the district’s temporary name for the school, will cost about $20 million for construction or for a lease payoff.

In the district’s transportation building, officials hope to spend about $11 million on renovations for a new program and acquisition of relevant equipment.

Districtwide, about $6 million would go toward the purchase of textbooks, $1.5 million toward equipment for central kitchens at school sites and another $5 million toward other furniture and equipment purchases throughout the district.

About $28 million would go toward technology-related purchases, including network hardware, wireless expansion, personal computers and copiers, printers and other instructional equipment and software.

Berry said a portion of the bond would also be allocated for safety and security updates to existing campuses.

“We have campuses that have administration buildings right in the middle of campus,” Berry said. “When we built those, back then, you wanted to invite people onto your campuses and showcase what you were doing and have this experience where people loved being on your campus. But now, with everything that’s happened across our nation, we want to know who is on our campus, and we want to make sure that’s appropriate before they get access to where our children are.”

Jim Bishop, a member of the political action committee Yes for Chandler Schools, who has been involved in several Chandler USD bond and override elections, said the passage of the bond is important for the future of the district, and the community at large.

The Chandler Chamber of Commerce is in support of the school bond, said President and CEO Terri Kimble.

“The bond will allow the Chandler Unified School District to continue to provide a high-quality education system that produces graduates who can fulfill the evolving and demanding workforce needs of Chandler businesses,” Kimble said. “This plays a large role in attracting and retaining companies that drive the city’s economic vitality.”

Berry, who, as a district official, is not permitted to encourage voters one way or another, said if the bond were to fail in this election, the district would end up having to ask for more dollars down the line, which could increase tax rates.

Berry said there is no formal opposition committee for the bond, and district officials anticipate more than 25 statements of support and no statements against the bond in the official voter pamphlet mailed to voters in the first week of October.