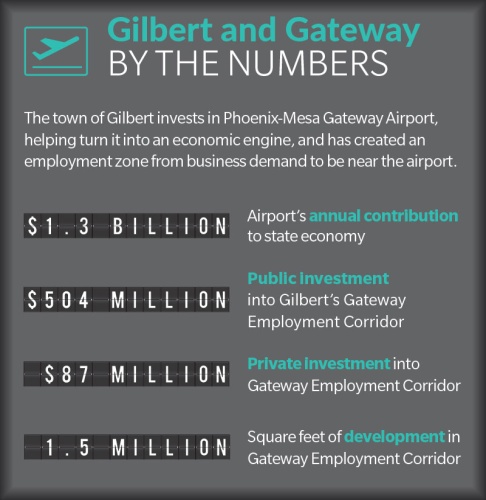 The town of Gilbert invests in Phoenix-Mesa Gateway Airport, helping turn it into an economic engine, and has created an employment zone from business demand to be near the airport.

Gilbert Town Council Member Jordan Ray, who serves as the town’s representative on the Phoenix-Mesa Gateway Airport Authority, has fond memories from his youth of the airfield, then known as Williams Air Force Base.

“As a kid, I’d go lay on Power Road and watch the planes land at ‘Willie,’ as we called it,” Ray said.

Thus he has an appreciation for the airport’s progression and jokes that if one were to lay down on Power Road now, you would not get up—a sure sign of the street’s increased traffic and the area’s growth. He also notes the Gateway Employment Corridor has the most room for expansion of any of the town’s employment corridors.

That economic benefit is why Gilbert, along with Mesa, Phoenix, Queen Creek, Apache Junction and the Gila River Indian Community, continue to invest in the airport. The airport in turn is using those investments toward expansion for the airport and land development for businesses.

For its part, Gilbert contributes money and leadership that have helped the airport to move from a decommissioned Air Force base into a commercial airport that served more than 1.5 million passengers last year.

“[The airport and authority partners] have a fairly constructive relationship,” said Ryan Smith, Phoenix-Mesa Gateway Airport media and government relations director. “I think everybody has a unique regional perspective, and so everybody is bought into the importance of the airport as a regional asset.”

The next big airport project is the building of a new $20 million air-traffic control tower about 200 feet from the old tower. The current tower, built in the 1970s, still has controllers using magnetic boards to track planes, Ray said.

The project had been stalled by laws that capped Gateway’s annual spending on its federal entitlement funds to $2 million. However, the FAA Reauthorization Act of 2018, which President Donald Trump signed into law Oct. 5, removed that barrier.

The airport has since started a design study and hopes to get a grant through which it will be able to start construction when design is complete about the end of 2019, Smith said.

Another project coming to fruition is SkyBridge Arizona, a business park development on 360 acres that the airport is leasing to the developers.

Smith said SkyBridge has committed to putting in “horizontal infrastructure,” such as taxiways, roads and sewers, for the ability to lease off the land over the next 49 years.

Other long-term projects could include development of the airport’s east side, including another terminal, Smith said.

Growth may be seen in other areas as well. The airport has four carriers, with almost all the routes belonging to discount carrier Allegiant. However, Smith said the airport would like to land a legacy carrier with a few business routes.

Gateway officials have approached carriers like Delta, United and SkyWest about a flight to Denver or some other hub airport, Smith said.

The problem is less capacity at Gateway than available gates at the other airports. Additional capacity might not come about at those airports until 2020 or 2021, Smith said.

“It’s one of our No. 1 priorities to go and find that [carrier],” Smith said.

Amid the airport expansion plans, town officials are careful to protect residents from potential developments that would affect the town’s quality of life.

The Town Council adopted land-use amendments March 21 for the Phoenix-Mesa Gateway Airport Overlay District. It was part of a larger effort to clean up the town’s land code, but also a response to the airport’s land-use compatibility plan, Gilbert interim Principal Planner Amy Temes said.

That plan advises the cities and towns on areas such as noise, height limits and navigation, which can change with airport plans. But the airport has no zoning authority, so it is up to Gilbert to make any changes it thinks are needed, Temes said.

The airport annually receives about $4 million total from the six area partners, including $350,000 from Gilbert.  The money is used on capital projects and maintenance at the airport, Smith said. The size of the contribution is based on the airport’s ownership structure.

That money has funded recent projects, such as new baggage carousels and added Transportation Security Administration lanes. Those updates allowed the airport to handle the record numbers of passengers—nearly 225,000 in March—using the airport, Ray said.

The partners’ money, however, is just a small slice of the airport’s revenue. It gets money from leases, aircraft parking and landing fees, fuel sales, parking and ground transportation, and rental car fees, among other areas.

The most recent available audit, for fiscal year 2017-18, showed the airport operating at a loss of nearly $8.5 million. However, it attributes much of the loss to non-cash depreciation expense, which amounted to $13.3 million. Taking out that expense would put the airport $4.8 million in the black. The airport also is in the black on its annual budget.

“The short answer is [the airport gets] better every month,” Ray said.
SHARE THIS STORY