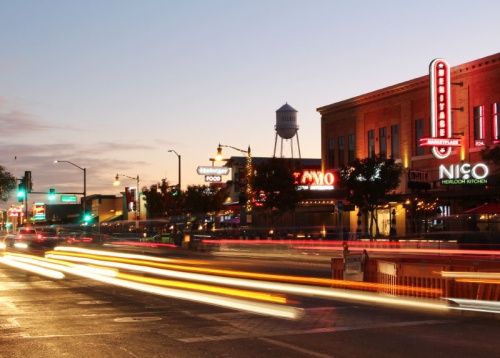 The emergence of a restaurant row on Gilbert Road thus far has been the most visible marker of the Heritage Districtu2019s rebirth.

While Gilbert’s Heritage District has evolved into a destination area with restaurants and festivals, officials are envisioning what is next for the original town footprint.

What they see is an area that diversifies from its restaurant row heart, offering more entertainment, retail shopping and business options while safely granting more access to the area. They see these additions happening without changing the district’s small-town, nostalgic feel.

Those aspirations are defined in the town’s latest redevelopment plan for the district. That plan, brought forth by district stakeholders in various areas, was three years in the making.

While a timeline on this is soft—depending on the actions of developers, who will bear much of the cost—residents may see the early stages of this latest redevelopment plan come to fruition in the coming months.

With that idea in mind, giving the town more of a cultural identity in the area of its historic roots is “an excellent investment to create,” Henderson said.

The public had several ways to offer input into the plan. It is the fourth such plan produced since the district, once an area of decaying old buildings from the town’s founding days, was declared a redevelopment district in 1989.

That designation made it eligible for state funds set aside to help give new life to blighted areas, Henderson said.

What evolved has been apparent to residents driving on Gilbert Road between the Western Canal and Elliot Road. The vintage buildings have become adorned with neon signs enticing people to eat at any of the restaurants. Those buildings have covered sidewalks for people to stroll and check in on small shops.

Off the main thoroughfare a bit, visitors can attend a production at the Hale Centre Theatre, play on a splash pad under the Gilbert Water Tower or take a class at Park University.

Those developments came from meeting goals of the first three plans. But having a restaurant row as the primary marker of the Heritage District is not the town’s vision, Henderson said.

Tyler Hudgins, who lives and works in the Heritage District and chaired the Redevelopment Commission, agreed and said he wanted to see more diversification when discussions started on a new plan.

“A lot of people will come; they’ll eat and they leave,” he said. “It’s been the pattern in the past. There have been some things to do, and there continues to be more things to do, but I felt like we’re reaching an oversaturation of restaurants. We have a gem with the downtown, so maybe a way to take that to the next level is to bring in more mixed use into the downtown Heritage District.”

The latest redevelopment plan is the first to deliver more than goals but a master plan for development,
Elliott said.

The town owns 56 percent of the land in the district and wants to leverage its ownership as it works with developers to bring projects to those parcels that are town-owned, she said.

That includes additional public amenities, such as a green space called The Commons, which will be near the district’s north end with public uses.

A neighborhood park also would be built for residents in multifamily housing in the district’s eastern half.

Additionally, a Living Room Plaza adjacent to the Water Tower Plaza would expand that area for public use.

Two projects to help with flow are a pedestrian/bicycle north-south thoroughfare that will be called The Paseo; and the “Vaughn Ventilator” that would give transportation access to the district from the west, which does not exist now and would give rise to another shaded, walkable retail area.

The plan identifies three areas for redevelopment. The first two are a north and a south anchor, both of which would fill vacant land in the district with commercial uses.

The other area would be the district core, where some parking lot space would be taken out to bring in more retail, office or residential space.

It also addresses other needs—parking, safety and technological navigation through traffic to open parking, among others—and possibilities, such as a hotel or two, conference center, or a transit station if the Maricopa Association of Governments’ proposed commuter rail ever emerges on the Union Pacific rail line. But the market will dictate what develops, officials said.

The cost of developing such extensive amenities was not a concern for those creating the plan, in part because public feedback did not bring up the concern.

“You can know the cost of everything and the value of nothing,” Henderson said. “And what we heard back from the community was, ‘We don’t want you to be concerned yet with this. We want a vision first,’ and no one put a price tag on that vision. No one said it can only cost a dollar.”

Instead, Henderson said return on investment was a greater factor. The town, he said, wants to get $7 back in revenue for every $1 it spends on development or infrastructure. He said the town uses a best-practice model to figure the return on investment.

The town’s ownership of so much of the land comes into play, as Elliott points out.

“When people look at this, the first thing they think is, ‘This is going to cost so much money from the taxpayers,’” she said. “But we’re negotiating for some of these elements to be developed by developers, where it’s not us coming in and using our capital improvement group to help build these. It’s the developers, with us saying, ‘If you want to purchase the site, you’re going to include these
elements.’”

The type of negotiation Elliott describes is going on now as the town talks with a selected developer for 9.1 acres the town owns on the north end of the district. That area just north of the Western Canal on the west side of Gilbert Road is slated to be the north anchor and The Commons as well as include the north end of The Paseo.

Elliott said plans for that could go before council for approval in the next 60 days.

“Then [the developer wants] to hit the ground running,” she said. “I know that the developer at one point was saying they’d love to just get in there and develop it in two years and be out.”

Henderson said while this is a 10-year plan, no one truly knows when, or even if, all of the development will unfold.

“We’re not suggesting that all of this will be done in 10 years,” he said. “We are, however, saying in the foreseeable future, these are the things and concepts and ideas that had been discussed and embraced and commented on by the community. We need the market to respond.”

Henderson noted a market slowdown is probable at some point in the next 10 years, though no one can know when. That could affect how the development rolls out.

“The idea is that you’ve got basically a 10-year vision behind all this, and if it has to carry over to subsequent years, we’re comfortable with that,” he said.