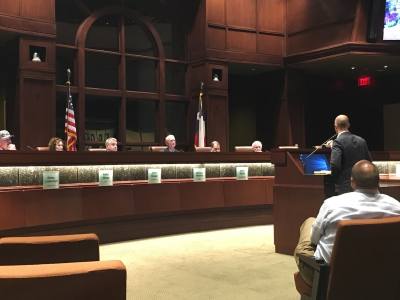 Colleyville City Council approved May 7 a $2.77 million contract for The Fain Group to construct a community plaza in front of City Hall. The plaza would provide a space for leisure activities and community events, such as picnics and public concerts.

The plaza would feature a fountain; green space; built-in and moveable seating; tables; and a shaded area, which can double as a stage, Assistant City Manager Adrienne Lothery said. One significant change is the road directly in front of the library would be reserved for pedestrians and blocked off from regular traffic and parking.

The project will be funded with money from a fund that has been set aside.

The Fain Group was the most highly rated, and the contract also includes an optional project scope to provide permanent improvements to the hardscape and landscape in front of City Hall that would be consistent with the aesthetics of the plaza, according to meeting documents.

City officials first brought forth the idea to the community about a year ago, presenting different conceptual designs to the community. After a series of public engagement opportunities and council discussions, plans were finalized around January.

The city plans to begin construction immediately with the goal to complete it in November before Colleyville’s annual Christmas tree-lighting ceremony later this year, Lothery said.

The contract was approved with a 6-0 vote by City Council. Council Member Chuck Kelley was absent.
SHARE THIS STORY