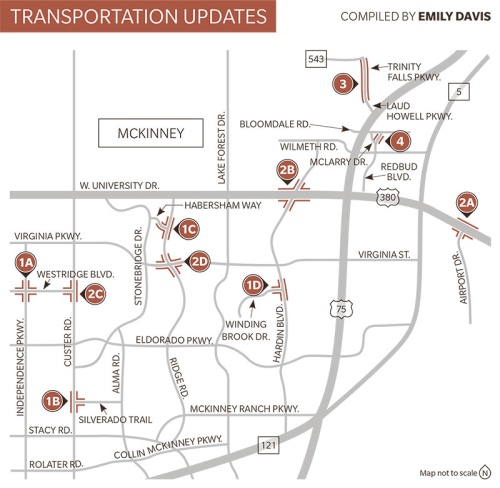 Here are four transportation projects to know about in McKinney.

This project includes the installation of new traffic signals at the intersections of (A) Independence Parkway and Westridge Boulevard, (B) Custer Road and Silverado Trail, (C) Ridge Road and Habersham Way, and (D) Hardin Boulevard and Winding Brook Drive. Construction will begin at Independence and Westridge in early December followed by installation at Custer and Silverado in February. The remaining two intersections will begin in March.
Timeline: December 2018-summer 2019
Cost: $1.3 million
Funding sources: city of McKinney, private developer This project includes the reconstruction of Redbud Boulevard between McLarry Drive and Bloomdale Road. Crews will widen Redbud from the existing two-lane road to a four-lane roadway with a median.
Timeline: October 2018-July 2019
Cost: $1.6 million
Funding source: city of McKinney