Behind the story: Concussions in Plano ISD 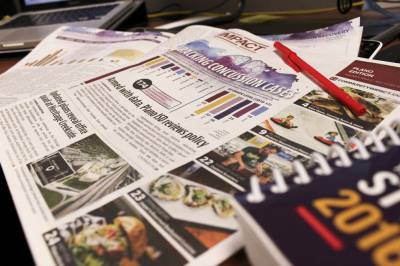 When reporters at the Plano edition of Community Impact Newspaper decided to explore the prevalence of concussions in the school districtu2019s athletics programs, we knew it would be a complex story to tell.

Editor’s note: This piece is part of Community Impact Newspaper’s participation in the Trusting News project, a collaboration of newsrooms across the country that is spearheaded by the Donald W. Reynolds Journalism Institute at the University of Missouri. During an era in which distrust in news organizations is an apparent problem and misinformation spreads swiftly, the goal of the Trusting News project is to better explain journalistic processes to the public in an attempt to regain that trust.

When reporters at the Plano edition of Community Impact Newspaper decided to explore the prevalence of concussions in the school district’s athletics programs, we knew it would be a complex story to tell.

For decades in sports, much remained unknown about the long-term consequences of severe or repeated head trauma on athletes. Even as the scientific community started bringing to light some of these medical conditions caused by head trauma—such as the degenerative brain disease CTE—school districts across the state were slow to develop protocols for tracking each instance of head-trauma events. Plano ISD was no exception.

We knew upfront there would be challenges to pursuing a story like this: The district records of concussions would be imperfect, sources could be reluctant to talk about a sensitive issue and finding voices for the story who were affected directly by head trauma might prove difficult. But it was precisely these challenges that made us confident this would be a compelling story to tell.

The idea came to us, as stories sometimes do, during a candid public discussion at a Plano ISD board of trustees meeting. Reporter Gavin Pugh was in place at the Plano ISD administration building as trustees discussed options to better prepare students who sustained concussions for their return to class. Ex-trustee Carrolyn Moebius, whose daughter had sustained a non-sports related concussion, appealed to her former colleagues on the board to do even more to address the matter.

The first step was to learn how widespread the problem was. A Plano ISD spokesperson told our reporter the best way to obtain the concussion records would be to submit a formal open records request, so Gavin did.

A few business days later, we got our response—a messy collection of PDF tables and concussion-protocol forms that contained spelling errors, inconsistent labeling and possible duplicate records. This wasn’t entirely unexpected. Concussion records are collected at the school level, and some coaching staffs appeared to interpret parts of the forms differently from others.

Sifting through the information wasn’t easy, but the first step was obvious. Because the records—even those the district had collected in a spreadsheet—were provided in PDF form, Gavin had to undertake the laborious manual task of entering hundreds of concussion records into a new database that could be sorted by sport, grade level and school.

Once this process was complete, we combed through the resulting database looking for trends and takeaways to inform our questions for the district and other sources. Hundreds of students have entered the district’s concussion protocol since 2015 when district recordkeeping was standardized and recorded in a single spreadsheet. Football, the highest-profile sport linked to head trauma, was responsible for slightly less than half of the concussion incidents recorded in Plano ISD in the 2016-17 school year.

Our commitment to thorough and balanced reporting took us back to district officials in the administrative offices and the athletics department, who we asked to explain a spike in concussion records that was recorded between 2014 and 2015. As it turns out the district may have simply done a better job of recording cases than it had in years’ past.

We also wanted to ensure that our readers had access to a diverse range of perspectives beyond the school district. Former trustee Moebius, whose daughter is still dealing with lingering symptoms from her serious concussion more than a year after sustaining the injury, spoke with us about her family’s experience.

We also pushed late up to our monthly deadline to add an expert perspective from Dr. Martha Grimm, the medical director for the Texas Health Ben Hogan Concussion Center in Plano. Her busy schedule made it difficult for us to get in touch with her at first, but the story required a voice with that perspective.

This process is pretty standard for our stories. In fact, journalists would consider this approach standard across the industry. But no process, or journalist, is perfect, no matter how committed we are to getting the full story.

By giving the average reader a window into how we approach our reporting by seeking a balanced array of perspectives, we hope to continue building trust with our readers in Plano and beyond.

Reporting is provided as part of Community Impact Newspaper’s partnership with the Trusting News Project.
SHARE THIS STORY