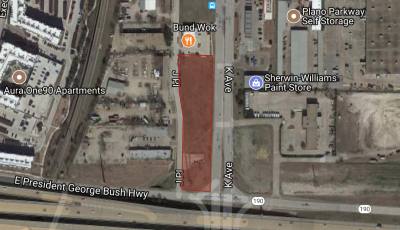 Plano officials will consider two new projects along the President George Bush Turnpike near the CityLine development in Richardson. One could make way for a four-story hotel near the intersection of Plano Parkway and K Avenue, and the other could add a pedestrian trail linking the two cities together.

See the list of things to know about the area surrounding downtown Plano below for more information:

A plot of land that falls within the Plano's  “transit corridor” boundaries will be considered by city planning officials for a potential zoning amendment that could make it the site of a new hotel.

The plot of land, which is located at the southwest corner of the Plano Parkway and K Avenue intersection, is across the President George Bush Turnpike from Richardson’s CityLine development—the same development that is home to the State Farm and Raytheon office buildings.

2. $2.3 million trail project could connect future Cotton Belt Line stations
The Plano City Council will consider Tuesday a $2.3 million expenditure for a trail along a DART right-of-way that would connect the cities of Richardson and Plano.

According to a city-prepared document, the 12-foot-wide trail would connect the future DART 12th Street station with the Bush/CityLine station.

The 3-D mural will include metal sculptures and an audio component and will be located on the southwest corner of K Avenue and 15th Street, according the release.

“We are thrilled with how each artist and mural have showcased Plano’s history in a unique way- and we are so thankful to Soheyla Rashidyan and Mike Korman who have helped shaped the project,” Plano Art Association President Gene Dillard said in the release.