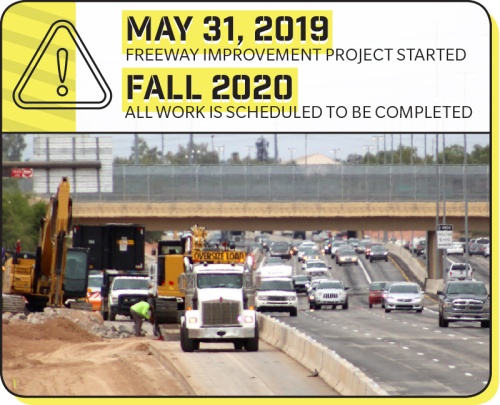 Smaller lanes and traffic delays on Loop 101 through Chandler are expected for the next year as the Arizona Department of Transportation expands the  roadway to accommodate future East Valley growth.

The project will add one lane in each direction in a 6-mile stretch on Loop 101 between Baseline Road and the Loop 202 Santan Freeway—a necessary change, according to ADOT officials, as traffic is projected to increase by about 13% in the next 15 years.

Transportation officials are projecting the road expansion will eventually decrease commute times by two minutes on the 6-mile stretch of the freeway, but said beyond the time-saving measure, the  project is preparing the area for other upcoming major road projects.

“The new Loop 101 lanes will help move traffic for decades to come,” ADOT spokesperson Doug Nintzel said. “And with another major Interstate 10 improvement project on the horizon, [the Maricopa Association of Governments] scheduled this Loop 101 widening project now so that the added traffic capacity can provide help when I-10 restrictions are needed.”

The project to add lanes to I-10 between the I-17 “split” interchange near Sky Harbor Airport and the Loop 202 Santan Freeway in Chandler could start by 2021, depending on completion of current environmental studies, according to ADOT. During the project, some drivers may have to use Loop 101 as an alternative route through parts of the East Valley, so officials planned the Loop 101 project now so the freeway would be better equipped to handle an increase in traffic.

Construction on Loop 101 started in late May, and the bulk of the work is expected to be completed by fall 2020, Nintzel said

“The whole idea of the [Loop 101] project is to reduce the congestion,” said Reed Dalbik, a resident engineer with ADOT, at a Chandler Chamber of Commerce event in July.

In addition to adding one general-purpose lane in each direction of Loop 101 south of Baseline Road, crews will construct retaining walls and safety barriers and upgrade sign structures, freeway lighting and landscaping, Nintzel said. The northbound Loop 101 bridge over Chandler Boulevard will also be widened.

Nintzel said ADOT will work to mitigate impact on local traffic as well as freeway traffic.

“Once the work zones are fully in place along the freeway, much of the work will take place behind barrier walls,” Nintzel said. “Restrictions are generally limited to nights and weekends. Drivers in the area should still anticipate heavier traffic at times, including along the major streets near Loop 101 between US 60 and Santan Freeway. The good news is our team is working to get most of the heavy work done over the next year.”

Construction started on the $76 million project earlier in the summer, with ADOT closing on- and off-ramps, lanes and occasionally the entire affected segment of the freeway overnight.

Nintzel said to reduce the impact to drivers and businesses, work that will require lane closures will not occur on weekdays or between Nov. 15 and the end of the year.

Freeway projects in the Phoenix region are scheduled by the Maricopa Association of Governments, Nintzel said. The MAG oversees a 20-year regional transportation plan approved by county voters in 2004.

In that plan are various improvement projects throughout the Valley.

Funding for the MAG projects include a half-cent sales tax for transportation improvements, which was also approved by county voters in 2004, and the region’s share of federal highway funds, Nintzel said.

“MAG is in charge of scheduling projects, and ADOT follows that plan in constructing improvements on behalf of the region,” Nintzel said.

Chandler Chamber of Commerce President Terri Kimble said the chamber has been posting ADOT alerts regularly for traffic updates to make sure businesses in the area are not blindsided by overnight construction.

“When you think about the East Valley, what stokes the fires of progress is transportation,” Kimble said. “The Chandler chamber feels transportation is a huge economic development factor. Improvements to the [Loop] 101 to accommodate a sizable workforce is inevitable. We depend so much on our freeways.”