Tennis courts at Old Settlers Park to be repaired 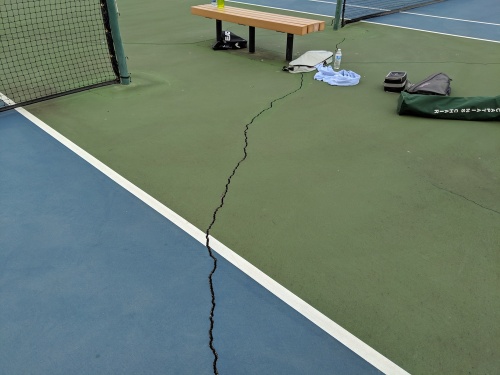 Twelve courts at Old Settlers Park on Palm Valley Boulevard are showing cracks with widths of up to an inch.

Show map
Anticipated to begin in late November or early December, renovations are coming soon to the tennis courts at Old Settlers Park in Round Rock.

Round Rock City Council approved an approximately $749,000 contract with Precision Construction and Contracting, LLC, on Oct. 24.

Work includes a complete resurfacing of the courts, which are deeply cracked, said Rick Atkins, Round Rock’s parks and recreation director.

The city had three bidders on the project, Atkins said, ranging to up to $1 million for the repairs.

“This is going to be a significant fix for us,” he told council during an Oct. 22 meeting.

The new surface will be a concrete overly on top of a post-tension cable structure—similar to the process used in home building—which Atkins said will be more stable than asphalt. He said he expects the surface to hold up for 30 to 40 years.

“We won’t have the problem that we have now, where the courts keep cracking,” he said.