13 transportation updates to know in September in Round Rock, Pflugerville and Hutto 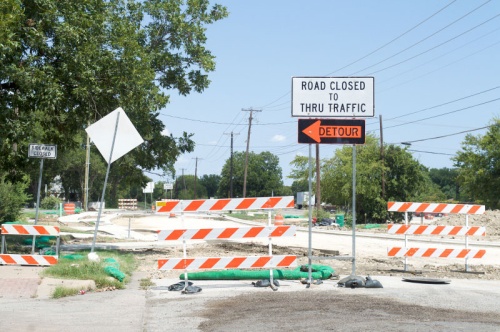 At its completion, the project will serve as a bypass road for downtown Round Rock to improve the flow of traffic, reduce travel times and lower traffic accidents.nStatus: Crews will begin preparing the subgrade on the McNeil Road extension and will begin work on curb and gutter installations. The portion of East Bagdad Avenue from Burnet Street to Sheppard Street remains closed.nTimeline: March 2018-spring 2019nCost: $4.25 millionnFunding source: Round Rock Transportation and Economic Development Corp. funds 1. McNeil Road extension
At its completion, the project will serve as a bypass road for downtown Round Rock to improve the flow of traffic, reduce travel times and lower traffic accidents.

2. Railroad quiet zones, Phase 1
This project will create railroad and street intersections that eliminate the need for train horns inside the city limits of Round Rock. Motorists will be prevented from crossing railroad intersections through the additions of medians and four crossing arms. Additionally, red flashing lights will trigger more quickly than at traditional railroad crossings.

Status: Union Pacific Corp. crews will begin their work September within the company’s right of way. An exact date for the commencement of work has not yet been set.
Timeline: September 2018-winter 2019
Cost: $3.1 million
Funding sources: city of Round Rock, federal grants

3. CR 119 extension
This project is a roadway extension for CR 119/Ed Schmidt Boulevard from Limmer Loop to Chandler Road in Hutto. Construction crews will work on creating two lanes of a future four-lane roadway with shoulder and a traffic signal at CR 119 and Limmer.

Status: One layer of pavement has been placed on half of the roadway, per city officials. The second half of the roadway is being prepared for paving, after which the entire roadway will undergo the second and final layer of paving. Work is underway to place large culverts and headwalls so a bridge can be built.
Timeline: October 2017-October 2018
Cost: $4.95 million
Funding source: city of Hutto

6. Hwy. 79 improvements
The project is paid for with funds from the tax increment reinvestment zone Hutto entered into with Williamson County. Work will be done on Hwy. 79 to make necessary improvements for the entrance to the Co-Op District, including curb and gutter construction and the addition of a median.

Status: Hutto is in the process of getting agreements finalized with TxDOT, according to city officials.
Timeline: summer-December
Cost: $196,214
Funding source: city of Hutto

7. I-35 at FM 3406 improvements
The FM 3406 bridge over I-35 reopened in June. Drivers should expect frontage road changes at FM 3406 as crews work on two new U-turn bridges. Officials expect the project to complete this fall, weather permitting.

8. I-35 access improvements
Crews are working to install lighting under the bridge at McNeil Road and I-35. Sidewalks and driveways are being installed on the I-35 frontage road between McNeil and Gattis School Road. Crews have completed pouring concrete for the bridge decks on the I-35 braided entrance and exit ramps between RM 620 and Hesters Crossing Road.

Crews will lay approximately 4,400 linear feet of new asphalt during construction, and a pedestrian pathway will be built during this phase as well.

Status: The city of Pflugerville has closed the road from Becker Farm to Colorado Sand. Construction is experiencing delays, and the timeline on the project has been pushed back to September.
Timeline: May-September
Cost: estimated $2.67 million
Funding source: city of Pflugerville bonds

2. Weiss Lane improvements
The Weiss Lane project will replace all bridges from East Pecan Street to Cele Road starting with the one-lane bridge near East Pecan. It will also expand the road from two lanes to four with turn lanes, shoulders, drainage improvements, curbs and gutters.

3. Railroad Avenue pavement rehabilitation
Pavement reconstruction and rehabilitation was deemed necessary by the city of Pflugerville after several segments of the avenue’s pavement were found to be failing. The repaving project includes plans to restripe the road from E. Pflugerville Parkway  to Wilbarger Street. Crews will also add turn lanes for Brookhollow Elementary School.

Several modifications have been made at the intersection of Railroad and Pfennig, including added turn lanes in every direction, signal modifications and pedestrian pushbuttons.

4. SH 130 widening, Segment 2
The first part of the SH 130 widening project will add a third lane to both the northbound and southbound portions of the toll road from SH 45 N to US 290, with additional entrance and exit ramp construction.
Status: TxDOT officials held project meetings in August. Construction on Segment 2 is expected to begin the first week of September, weather permitting.

5. Pfennig Lane roadway improvements
Pfennig Lane will be reconstructed to be a three-lane section that includes a two-way central left-turn lane, curbs and gutters, and curve modifications.

Status: The project is currently under design, and bidding opened in May, according to Pflugerville city officials.
Timeline: project to be bid and begin in summer 2018
Cost: TBD
Funding source: city of Pflugerville