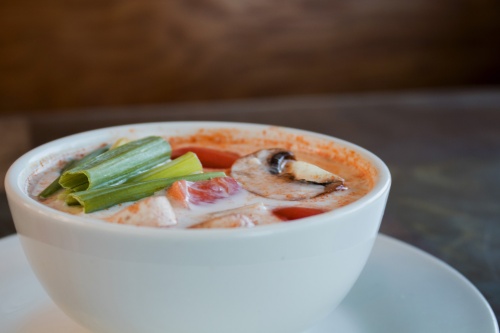 Tom Kha soup is served with mushrooms, galangal, lemongrass, onions, tomatoes and kaffir leaves with a choice of chicken, tofu, or vegetable for a bowl ($6) or pot ($11). Shrimp is an extra $2.

In the past month, four new restaurants or drink places have opened in the Northwest Austin area and two others announced their openings are coming soon. The first brick-and-mortar location for PitaLicious opens this weekend in Northwest Austin.

The business has three food trucks in Austin and serves Mediterranean Lebanese cuisine, including falafel, chicken shawarma, and beef or lamb gyro.

The restaurant is located at 4101 W. Parmer Lane, Ste. C, Austin, in the former spot of Anatolian Kitchen. Texas-based Houndstooth Coffee will open a new location in Domain Northside in the space formerly occupied by Apanas Coffee & Beer this fall.

The new 10,000-square-foot space will feature a main dining room with views of the chefs in the kitchen as well as space to accommodate up to 350 diners. In other restaurant news:
Ng Cafe

In July, Y and Nguyet Quach celebrated the recent renovations and name change of Chang Thai Thai Cuisine, which they bought in April 2017.

The restaurant, located at 13000 N. I-35, Austin, is now called Ng Cafe and serves the Vietnamese banh mi sandwiches formerly found at the couple’s previous restaurant, NG BMT, as well as other Thai-inspired dishes, baked goods and desserts. 512-491-8859. www.ngcafeatx.com