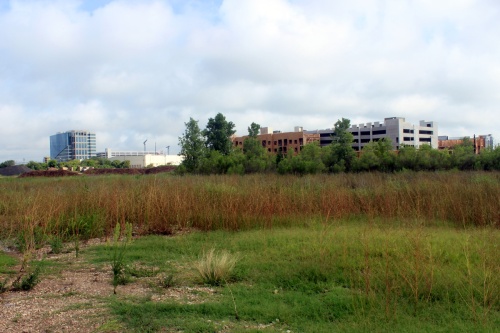 McKalla Place is an undeveloped piece of land owned by the city. Plans to use the site for Austin Water were abandoned after an explosion occurred in 2003. The site was previously the location of a chemical plant and has now been remediated.

While the city is in the midst of discussing terms over a deal to bring Major League Soccer to Austin, the City Council is also considering other options to develop a 24-acre plot of city-owned land.

On Friday, the city closed submissions for others to present ideas to develop the city-owned property at 10414 McKalla Place, Austin. That is the same site that Precourt Sports Ventures has set its sights on to build a new MLS stadium and relocate the Columbus Crew team.

The council will hear presentations on other McKalla proposals at 3 p.m. as part of its work session Aug. 7 at City Hall, 301 W. Second St., Austin. The presentation comes before an Aug. 9 vote on whether to authorize negotiating and executing an official deal with PSV. Last Wednesday, the City Council dug into the terms of a proposed deal with PSV.

Read more about all of Community Impact Newspaper's coverage on McKalla Place here. A proposal submitted by a group called Our McKalla Station also capitalizes on the mixed-use vision the city identified in the North Burnet/Gateway Master Plan adopted in 2006 as well as the proposed terms from PSV.

The group would lease the land for 80 years at $600,000 per year, or $50,000 more per year than the proposed term with PSV, and would ask to be exempt from traditional property taxes. Instead, a special district would be created to collect ad valorem taxes based on the value of the structures built on-site. The funds would create a revenue stream for affordable housing programs, sports organizations and green and public spaces.

“By supporting dozens of worthy nonprofits around the city of Austin focusing on a wide range of projects and causes, McKalla Station will become the catalyst of an Austin community revitalization. Within the first 40 years alone, McKalla Station District will disburse $985 million to worthy local causes, with benefits including hundreds of new affordable housing units and over one hundred new soccer and sports fields,” the proposal states. A proposal by North Austin resident Marisa Pier Perryman aims to keep McKalla Place a spot for “celebrating and preserving the culture” of Austin.

“Parks provide countless benefits to the community and the economy alike,” Perryman wrote in the proposal. “As a city, we ought to protect our green space and our culture and think about what would truly benefit the community.”


Ideas in this proposal include using repurposed and recycled materials in a park; having multiple outdoor stages available for performances; reserving space for food trailers; incorporating art; managed lawn space; an outdoor dog run; hosting farmers markets or artisan fairs; and a Park & Ride for a new MetroRail station.

“As the city’s ‘Second Downtown,’ North Austin is lacking in art and cultural assets. Most downtown areas in bigger cities feature lots of public art and attractions. The city’s own 2016 Cultural Asset Mapping Project shows a huge disparity between downtown and North Austin,” Perryman’s proposal states. 3 and 4. Options for soccer

Austin-based Capella Capital Partners submitted two proposals, one of which is a refinement of what was presented to North Austin residents June 5. That proposal includes one major tweak, Capella Managing Partner Neil Francois said.

His firm met with representatives for the Circuit of the Americas—the future home of the United Soccer League team that launches in 2019—and COTA has offered to donate land to build an MLS stadium as well as provide 20,000 parking spaces. Capella would purchase the McKalla site for $22.1 million or lease the land for $750,000 per year.

“I think it’s a win-win for not only the MLS soccer team but for Precourt and for the community surrounding the McKalla site,” Francois said.

This plan would include 120,000 square feet of retail space with a focus on local businesses. An on-site hotel could include 150-300 rooms, and office space would total 800,000 square feet. Of the 1,200 proposed multifamily units, 300 would be reserved for affordable housing.

“We’re not asking anything from the city of Austin for [affordable housing],” Capella Chief Financial Officer Scott Moxham told the council on Aug. 1.

Capella’s second proposal pitches partnering with PSV to co-develop the McKalla site with a stadium as well as retail, office, hotel and 1,150 housing units, including some for affordable housing. Three parking garages would feature 2,000 spaces.

Although Capella has not spoken with any PSV official over its second proposal, Francois said they have discussed it with Richard Suttle, PSV’s local legal representative.

“Our No. 1 goal is to see that site get developed with the highest and best use,” Francois said.

Many local restaurants and retailers have also contacted Capella expressing interest in the project, Francois said.

Additionally, Capella is developing a 3-acre site to the west of McKalla in a project called North Gateway Plaza. That project breaks ground in 2019 and will bring a 22-story tower with 285 apartment units and an 11-story office tower. John Chen is part of a local group of developers, including Marcus Whitfield, that teamed up to create their proposal for McKalla Place that also was previewed before residents June 5.

“We’re promoting a project that is centered on bringing all Austinites together through facilities and organizations we hope to seek as our partners,” Chen said. “We hope to leverage the location of features of the site.”

In addition, the plan calls for a 50,000-square-foot grocery store, space for a wellness and fitness studio, 80,000 square feet for education and 418,000 square feet of office space.

“It will be both social programs and environmental programs and housing opportunities that are all designed to actually draw form the unique aspects, not just putting them there because there’s space but to take advantage of the unique characteristics of the property,” Chen said.

Other proposed uses in the plan include studio spaces for performance art and music; dance and theater space; a cooperative gallery; a healthy nutrition prep kitchen and cafe; and a central plaza.

The proposal indicates the group would purchase the property for $22.5 million or enter into a lease for $2.5 million per year plus escalation.

More information about the proposal is available here. A proposal by Capital Commercial Investments Inc., led by founder and President Paul Agarwal, also proposes to buy the McKalla property for $17.75 million. This cost would include all land leases, easements and other rights, benefits and intangibles owned by the city.

No other information about what Capital Commercial would do with the property was included in its proposal.