Float Fest update, school board Q&As and 3 other things to know this week in San Marcos, Buda and Kyle this week 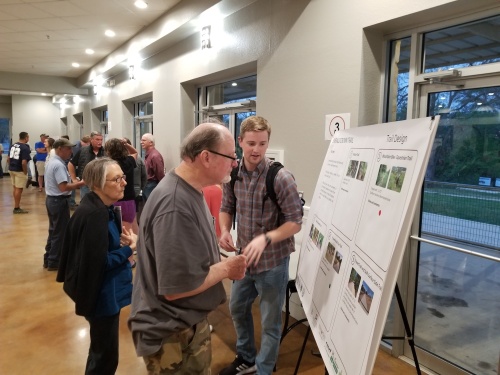 During the last week of March the public was able to attend one of three workshops to learn about the proposed trail that would connect San Marcos, Buda and Kyle to South Austinu2019s Violet Crown Trail.n

Here's what you need to know to start your week in San Marcos, Buda and Kyle.
1. Growing healthcare presence could mean more jobs, diverse housing and development for Buda
What does the addition of three healthcare facilities and 225 new jobs mean for the city of Buda?

Reporter Starlight Williams looks at how the addition of a new Baylor Scott & White Health hospital, a new St. David's HealthCare ER center and a new Ascension medical center could bring diverse housing and retail to the growing town along the I-35 corridor. Tune in at www.facebook.com/communityimpactsbk and let us know what issues you want candidates to address. 3. Hays County residents briefed on potential regional trail
“We won't have any trails where somebody doesn’t want one."

That is the message of the organizers behind the Emerald Crown Trail, a proposed multiuse path that would connect San Marcos to South Austin through Buda and Kyle.

Several residents turned out last week to voice their opinions on the potential trail, whose path has not been fully mapped yet.

4. Buda looks for ways to use old city offices
With the completion of the public safety complex, municipality complex and public library almost done, the city of Buda is looking for ways to use the current city hall, city hall annex and library.

The city is seeking requests for proposals on how the old buildings can be used. Citizens have until June 15 at noon to submit proposals to the city and can find the submission forms at www.ci.buda.tx.us/137/purchasing. 5. Float Fest is a go with 20,000 attendees
A compromise between Guadalupe County and the promoter of music, camping and tubing festival Float Fest has been reached, and area residents will see up to 20,000 festivalgoers the weekend of July 20-22.