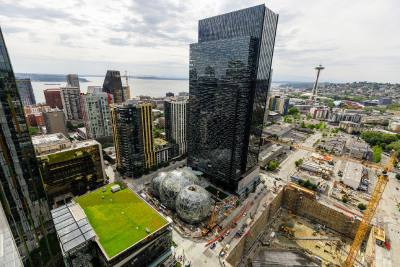 Amazon is searching for a city to build an 8.1 million-square-foot second headquarters while keeping its first in Seattle.

Austin's bid to land Amazon.com Inc.'s second North American headquarters, or HQ2, seems more and more like a possibility now that it has been named among 20 finalists. Here are the biggest stories we are following this week:
How Austin stacks up to its 19 competitors
The finalists include 18 cities—one in Canada—one county and one geographical area, each with varying populations and sizes.

City to mull new homeless shelter contract, reimagine facility's purpose
With a new contract set to be completed Sept. 30, the city hopes to rethink the purpose and limitations of the Austin Resource Center for the Homeless, a city-owned downtown shelter.

State representative and district court justice candidates speak
Six weeks ahead of the primary elections, candidates for Texas House of Representatives District 46 and the 459th District Court spoke to members of the North Austin Civic Association about the most pressing issues in those jurisdictions.

Tax season is upon us. Here's how to get your taxes prepared for free.
Local nonprofit Foundation Communities will provide free tax preparation for low- and moderate-income Central Texans starting Jan. 22, according to a recent press release. The 2018 tax season begins this week.