4 road projects completed in San Marcos, Buda and Kyle in 2017 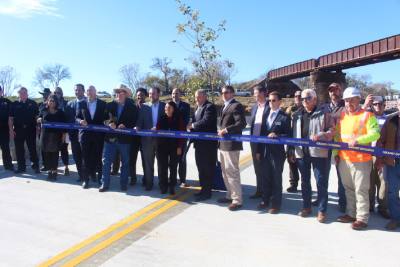 Officials cut the ribbon for the opening of Post Road Bridge, which was completed in December.

2. The four-lane overpass on Hwy. 123 over Wonder World Drive in San Marcos was constructed to address safety and mobility, according to TxDOT, which managed the project. The overpass costs $11.6-million.
Date completed: March 20

3. Reconstruction of the 1-mile portion of Bunton Creek Road from I-35 to Lehman Road in Kyle is substantially completed and was funded through the city’s 2013 bond issuance. The project used $3.8 million of the bond funds.
Date completed: August

4. Goforth Road was expanded to include two to three lanes in areas between I-35 and Bunton Creek Road. Construction began in April 2016. The $6.6 million project was funded through Kyle’s 2013 bond issuance and is substantially complete.
Date completed: August