By the numbers: See how Austin and Dallas compare to Amazon’s other HQ2 finalists 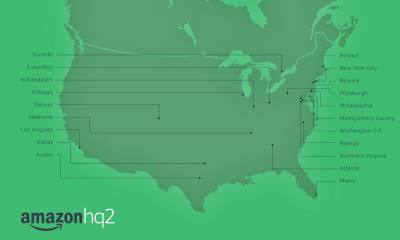 Amazon narrowed its list of candidates for HQ2 Thursday to include these 20 cities and areas.

Seattle-based online retailer Amazon named Austin and Dallas as two of 20 finalists for the company’s potential second headquarters, HQ2, in an announcement Jan. 18. The company says it could make an estimated $5 billion capital investment to create 50,000 jobs across 8.1 million square feet of office space in one of the 20 locations selected.

Of the 20 Amazon finalists…

Of the 17 U.S. cities on Amazon’s list of finalists…

Finalists by time zone
The majority of Amazon's finalists were located near the east coast of the country. Of the 20 finalist…

Finalists New York City and Newark are located within the New York metropolitan area. Parts of Northern Virginia, Montgomery County in Maryland and Washington D.C. are included in the Washington-Arlington-Alexandria metropolitan area, with an estimated population of 6,131,977.

Finalists by city size
Nashville is the largest city on Amazon’s list of finalists at 525 square miles, and Newark is the smallest city on the list at only 26.1 square miles.

Montgomery County has an area of 507 square miles.

The exact parameters of Northern Virginia were not specified in Amazon’s list.