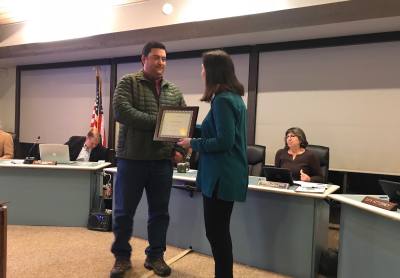 Josh McKay was presented a plaque by Mayor Roxanne McKee at the Rollingwood City Council meeting on Jan. 17.

“You can look at the percentages and see that we are on track,” Lewis said. “We are under budget in our expenditures.”

2. Water rate and fees structure changes on the way?
Council tabled a motion to adopt an ordinance that would significantly alter the structure of city water rates and fees. Grady Reed, an engineer from firm HDR Inc., said the fund balance in the city’s water fund is “essentially zero” and the city has been using the general fund to cover the shortfall. Click here for a breakdown of proposed changes.

3. Cross culvert improvements coming
A project to improve the cross culvert at Nixon Drive and Pleasant Drive has been developed and could be put out for bid in the coming weeks, said Jay Campbell, project manager for the city’s engineering firm LNV.

Council approved a task order for the surveying and design of the project at its July 19, 2017, meeting.

LNV engineer Marcus Naiser said July 19 that the project would increase the diameter of the existing culvert and make adjustments in easements as needed to improve drainage capacity and reduce soil erosion.

5. City accepts donation for body cameras
The city accepted a donation of $5,300 from Josh and Katie McKay for new body cameras for the Rollingwood Police Department. Josh McKay was presented a plaque at the meeting by Mayor Roxanne McKee.