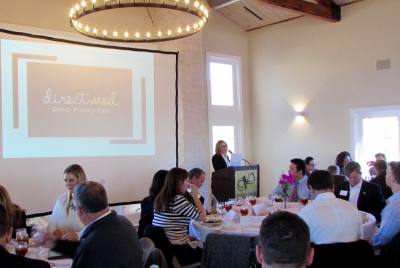 Laura Mitchell, president of the Lake Travis Chamber of Commerce, introduces guests at the 2018 Lake Travis Economic Forecast on Jan. 17.

The Lake Travis Chamber of Commerce started the new year on Jan. 17 with its annual Lake Travis Economic Forecast luncheon.

The following are eight highlights from the luncheon.
1. Capacity is being added in Lake Travis ISD
To address growth at Lake Travis Middle School, Lancaster said the district would look to add six classrooms to the campus by using three portables for the 2018-19 school year. The district anticipates its third middle school will be built by the start of the 2019-20 school year, and construction on its seventh elementary school could begin next November. Both schools are part of the district's bond package that was passed by voters last November.

2. Annexation by Bee Cave could slow in 2018
Parker said the city has been active in annexing nearby land in recent years but, due to new regulations, he feels annexation opportunities will be “few and far between in the future.”

3. Population and commercial growth is continuing in Lakeway
Each year, the population of Lakeway increases by about 500 people,  Jones said. The city has averaged five-10 commercial building permits a year and Jones said he expects that to continue in 2018.

5. Lake levels should support business this year
Jones said that when it is reported that Lake Travis is less than 640 feet above mean sea level, its bad for local business. Current lake levels are 669.34 feet and he said the lake is projected to remain above 650 feet, even in the case of an extreme drought, by the end of 2018. This “bodes well for business,” he said.

6. The Texas economy grew in 2017
After economic declines in 2015 and 2016, 2017 saw the Texas energy and manufacturing sectors rebound, Phillips said. Overall, the state economy is expected to grow by about 3 percent in 2018, compared to 2.5 percent in 2017, he said. The biggest risks to the market would be a decline in oil prices or exports.

7. LTISD’s next bond is anticipated for 2020
The district anticipates its next bond election will take place in 2020 to increase capacity at the high school level, Lancaster said. The district will explore whether the community would prefer to create a second 9-12 high school in the district, or to develop a new configuration that would allow the district to maintain one high school but establish new campuses for certain grade levels.

8. RM 620 traffic solutions are still far the future
Each speaker Wednesday mentioned traffic on RM 620 being a main concern for local residents. Jones said the Texas Department of Transportation is looking for Capital Area Metropolitan Planning Organization funding to further advance a project to add lanes to RM 620. However, the project is likely still three to four years away, he said.