10 local transportation projects to know in 2018 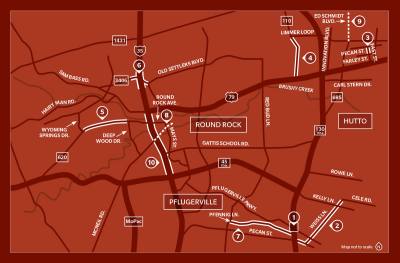 As Round Rock, Pflugerville and Hutto continue to grow, traffic projects are inevitable. Here are 10 projects to watch this year:

In partnership with the Texas Department of Transportation, the intersections on each side of SH 130 for the frontage roads at East Pflugerville Parkway will be reconstructed with traffic signals, storm sewer improvements, sidewalks and traffic control. The parkway reconstruction will be bid upon in the spring.

2. Weiss Lane improvements
The project will replace all bridges on Weiss Lane from East Pecan Street to Cele Road starting with the one-lane bridge near East Pecan. It will expand the road from two lanes to four, adding turn lanes and shoulders as well as improving drainage with storm drain facilities and curbs and gutters.

3. East Street reconstruction
This 2008 bond project from the city of Hutto includes reconstruction of East Street from Pecan Street to Farley Street, an asphalt overlay on East from Farley to Hwy. 79, and a parking lot and on-street parking with 43 additional spaces for downtown businesses on East.

4. CR 110 South improvements
The project includes improvements to approximately 2.2 miles of CR 110 between Hwy. 79 and Limmer Loop. It will upgrade the existing two-lane roadway to a three-lane roadway, which is half of an ultimate six-lane roadway.

5. RM 620 widening
The 2.74-mile segment of roadway in Round Rock will be widened from four to six lanes and will include new curbs and gutters and a raised median. The segment will include construction of left- and right-turn lanes, culverts, water-quality facilities, retaining walls and the construction of a sidewalk on the north side of RM 620.

Timeline: Williamson county widening work to be completed in spring 2018

7. Pfennig Lane roadway improvements
Pfennig Lane will be reconstructed to be a three-lane section that includes a two-way central left-turn lane, curbs and gutters, and curve modifications.

Timeline: project to be bid in spring/summer 2018

8. McNeil extension
The project will eventually serve as a bypass road for downtown Round Rock to improve flow of traffic and reduce travel time. The extension will realign McNeil Road and carry it through to Georgetown Street, up to Main Street.

10. I-35 access improvements
The project in Round Rock will provide enhancements to 2.3 miles of I-35 from SH 45 N to Hwy. 79. Work includes the reconstruction of northbound and southbound frontage road intersections at I-35 and Hwy. 79 and the construction of braided ramps on northbound I-35 between Hesters Crossing Road and RM 620 in an effort to relieve bottleneck issues.