Here are the 11 South Austin restaurants we featured in 2017 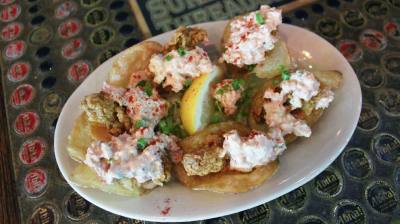 Evangeline Cafe is one of 11 restaurants featured in the Southwest Austin edition of Community Impact Newspaper in 2017.

South Austin is home to many restaurants and eateries offering menu items ranging from barbecue to vegan-friendly. Here are the 11 restaurants we featured in 2017: Michell Huber, owner of Freda's Kitchen, gathered inspiration for the traveling cooking class from her grandmother Freda, who she learned to cook Polish pierogies with. Visitors to Freda’s Kitchen cook alongside international chefs who share family recipes in intimate, hands-on settings.

Will and Ethan Huynh wanted to bring authentic Vietnamese cuisine to South Austin. The family-owned business, Me Con Bistro, showcases food prepared by their mother En Hang, who spent time as a street-food vendor in Vietnam.

Rusty Cannon Pub owner Ben Pezzi said he wanted to create a neighborhood hangout that caters to local residents and their families. The pub offers a wide range of food and drinks, as well as sporting and family-friendly events. The menu at Evangeline Cafe honors Cajun traditions, such as red beans and rice, jambalaya, gumbo and etoufee, but it also reflects owner Curtis Clarke’s creativity as a chef. Gold Band Creole is his twist on the classic shrimp Creole, served over fettuccini pasta instead of rice and with a gold band of Parmesan cheese. Clarke, a native of Lake Charles, Louisiana, opened the Cajun restaurant on Brodie Lane in 2003. Vegan bakery expertly crafts food for all eaters
Co-owners, long-time friends and life partners Sascha Biesi and Yauss Berenji said by opening Skull & Cakebones they hoped to offer a menu that appealed to both omnivores and vegans. The bakery offers fresh pastries daily and a brunch and lunch menu featuring vegan-friendly dishes.