Transportation project updates in Round Rock, Pflugerville and Hutto 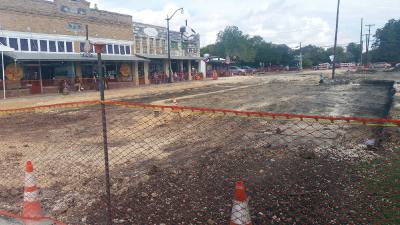 This 2008 bond project in the city of Hutto includes reconstruction of East Street from Pecan to Farley streets, an asphalt overlay on East from Farley to Hwy. 79, and a parking lot and on-street parking with 43 additional spaces for downtown businesses on East. Several amenities from the original project, including food truck pedestals, bike racks, street furniture, benches and trash cans were removed to help reduce costs.

The project in Round Rock will provide enhancements to 2.3 miles of I-35 from SH 45 N to Hwy. 79. Work includes the reconstruction of northbound and southbound frontage road intersections at I-35 and Hwy. 79, and the construction of braided ramps on northbound I-35 between Hesters Crossing Road and RM 620 in an effort to relieve bottleneck issues.

Status: Bridge beams are being placed at night for the braided ramps; concrete is being poured on ramp bridge decks. The frontage road and intersection improvements at Hwy. 79 are nearly complete except for final paving.
Timeline: July 2016-spring 2019
Cost: $28.1 million
Funding source: Texas Department of Transportation

In partnership with TxDOT, the intersections on each side of SH 130 for the frontage roads at East Pflugerville Parkway will be reconstructed with traffic signals, storm sewer improvements, sidewalks and traffic control. The parkway reconstruction will be bid upon in the spring.

Reconstruction of the existing two-lane section of Rowe Lane is underway, adding shoulders to the road. The project is a cost-sharing safety project with Travis County bond funds approved by voters.

Status: Phase 3 is underway, which includes the closure of the road from West Rowe Loop to Commons Parkway and Treyburn Lane. Rowe Lane is closed to through traffic. Detours are posted around the work area.
Timeline: August-spring 2018
Cost: $2.7 million
Funding sources: city of Pflugerville, Travis County This 2008 bond project in the city of Hutto includes reconstruction of East Street from Pecan to Farley streets, an asphalt overlay on East from Farley to Hwy. 79, and a parking lot and on-street parking with 43 additional spaces for downtown businesses on East. Several amenities from the original project, including food truck pedestals, bike racks, street furniture, benches and trash cans were removed to help reduce costs.

Status: East is closed while officials install the water line and perform pavement repairs as part of Phase 2, which is expected to be completed by mid-December. Phase 3, involving the final paving, will begin in 2018.
Timeline: September-spring 2018
Cost: $1.03 million
Funding source: city of Hutto bonds

The 2.74-mile segment of roadway in Round Rock will be widened from four to six lanes and will include new curbs and gutters and a raised median. The segment will include construction of left- and right-turn lanes, culverts, water-quality facilities, retaining walls and the construction of a sidewalk on the north side of RM 620.

Status: Williamson County has completed work on the roadway widening on the south side of RM 620 between Wyoming Springs and Deep Wood drives. Work continues by the county on widening the roadway on the north side of RM 620. After this is completed, the contractor, Cox Commercial, will finish work in the median. Round Rock is finishing acquiring right of way for a bridge over the railroad tracks at Chisholm Trail. After this step, the city will move into utility relocation in 2018.
Timeline: Williamson county widening work to be completed in spring 2018
Cost: $6 million
Funding sources: Williamson County, TxDOT

The project will replace all bridges on Weiss Lane from East Pecan Street to Cele Road starting with the one-lane bridge near East Pecan. It will also expand the road from two lanes to four, adding turn lanes and shoulders as well as improving drainage with storm drain facilities and curbs and gutters.

The project will replace and widen the Old Settlers Boulevard bridge, construct two new U-turn bridges—one in each direction—and make bicycle and pedestrian enhancements. The project is designed to reduce bottlenecks and improve travel times at the I-35 and Old Settlers intersection in Round Rock. The city of Pfugerville is working on a pavement rehabilitation and reconstruction project in two phases. Phase 1 began in early November south of Pflugerville Parkway and north of the Gilleland Creek bridge. The city will also complete the construction of a new traffic light at the intersection of Grand Avenue and Black Locust Drive. Phase 2 will begin south of the Gilleland Creek bridge and end near Viki Lynn Place. Each phase will require traffic to be moved to one side of the roadway, leaving a single lane open for each direction.

Status: The city is working on Phase 1, which has a planned completion of mid-December.
Timeline: Anticipated completion in early 2018
Cost: TBD
Funding source: city of Pflugerville

The project includes improvements to approximately 2.2 miles of CR 110 between Hwy. 79 and Limmer Loop. It will upgrade the existing two-lane roadway to a three-lane roadway, which is half of an ultimate six-lane roadway.

The project will connect Alliance Boulevard to Innovation Boulevard and will run east to west.

Status: Construction will begin on the roadway after the installation of all utilities. Utility work began in mid-November.
Timeline: Work scheduled to be completed by May, weather permitting
Cost: $4.95 million
Funding source: city of Hutto

The project will eventually serve as a bypass road for downtown Round Rock to improve flow of traffic and reduce travel time. The extension will realign McNeil Road and carry it through to Georgetown Street, up to Main Street.