Development updates in Round Rock, Pflugerville and Hutto 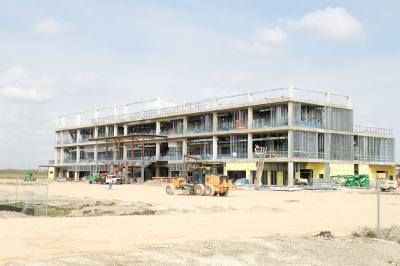 News updates from developments underway in your community. Construction is coming along on the apartment complex included in the Timmerman Subdivision. Roads around the Commerce Place Apartments have been constructed and paved, while the apartments themselves are vertical.

Work on the exterior architecture is close to completion. The Timmerman Subdivision estimates its residential-area clubhouse to open in February and plans to open its first multifamily residential building to tenants in March.

No further action is currently planned on the other plots in the Timmerman Subdivision, per the City of Pflugerville. The hospital site sits on 26.39 acres, according to preliminary site plans submitted by Baylor Scott & White.

Baylor Scott & White officials expect the three-story medical center to employ more than 125 people when it opens in fall 2018. Entrances for the building will be built off Meister Lane and Heatherwilde Boulevard. Living Spaces expects the $40 million investment project to be completed and open in late 2018. THE GIN AT THE CO-OP DISTRICT

The Gin at the Co-Op District began its first phase of development after a groundbreaking ceremony Nov. 2.

Demolition operations commenced Nov. 6 with the removal of slabs at the southern end of the property’s lawn. Work will begin on the process of moving the site’s iconic cotton silos to other locations on the property.

The Co-Op District will be the new home for Hutto City Hall, a two-story, 40,000-square-foot building located on the far northern end of the development. Currently, vertical construction on the new city hall is expected to begin in April and a move-in date is set for December 2018.

Construction on essential infrastructure for the Co-Op District will begin simultaneously to construction on Hutto City Hall. This includes the creation of several roads and the demolition or renovation of existing road stock. Additionally, there are plans to erect two parking garages in this first phase of construction. Construction began at Titan Development’s Innovation Business Park Nov. 6 after a groundbreaking ceremony. Titan Development is set to invest $80 million in the first phase of the project, which will bring 2.5 million square feet of mixed-use speculative building space.

Initial construction on the project will bring a 100,000-square-foot speculative building to be completed in nine to 12 months. Documents made available by the city of Hutto said the first building will be made available for occupancy in spring 2019.

Currently, Titan Development has plans to solely develop the first speculative building in the business park, though the full plan for the first phase of development calls for the construction of 800,000 square feet of building space. Work on the first phase of the City Centre project in Round Rock is close to completion, according to Darren Siegel, leasing and sales agent for Don Quick & Associates.

The final stages of construction are being completed on a 22,500-square-foot office building, such as electrical and plumbing work. Crews are installing the glasswork for the exterior and completing the masonry of the architectural design. Parking for the first building will be laid out shortly after.

Developers on the project expect to have the occupancy permit for the building completed by the end of December. Siegel said the office space doesn’t have any confirmed tenants as of yet, though he expects the first tenants to be able to begin operations in the building around July.

Siegel expects phase two of the City Centre project to break ground in January after permitting is approved. The second phase of the development will bring an identical office space building to the property. Mesa Creek, a two-story office building at 801 E. Old Settlers Blvd., Round Rock, began excavation the second week of November. The development will continue on-site work over the next three months and developers expect to begin building vertically in March.

The building in Round Rock will bring Class A office spaces, which are generally regarded as new buildings with up-to-date architecture and infrastructure that are positioned in desirable locations.

Real estate services firm Savills Studley reported they are currently considering the second phase of the project, which could bring an adjacent building and additional park space. The property Summit II is located on was purchased simultaneously alongside the Summit I at La Frontera, which was an existing structure at the time of sale in late 2013.

Mark IV Capital expects construction on the two-story building, which is adjacent to the fully-leased Summit I at La Frontera office space, to be completed by April 2018.

Summit II at La Frontera features a 47,500-square-foot maximum occupancy plan. The California-based developers did not comment on tenants who have signed to occupy space in the building.