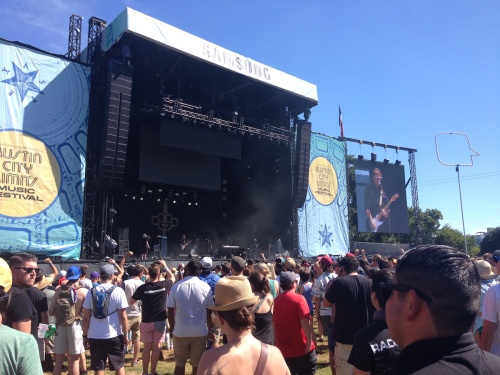 Many festivalgoers will travel through the city of Rollingwood, located less than a half mile west of Zilker Park and MoPac, by car or by foot when commuting to the park.

“Several thousand people a night come through the city to get back to their cars on Bee Caves Road or to be picked up in the area,” Rollingwood Police Chief Dayne Pryor said. "Every year is a little different."

Pryor, who has been an officer in Rollingwood and neighboring West Lake Hills for over 30 years, outlined what those planning to attend ACL should expect, what Rollingwood police officers in the area are doing to help pedestrians and how Rollingwood residents should prepare for the two-weekend event. Attending ACL for your first time? Here’s what to know
Pryor said concertgoers should make sure to know their surroundings, dress accordingly based on the weather and stay hydrated.

“Especially if this is your first time going to ACL and you get dropped off, study the area and know where you are before heading to Zilker Park,” he said. “The area looks a lot different at night, so learn your route before it gets dark out.”

Pryor said officers find people who “after the concert follow the masses” for several miles without knowing where they are headed or where they need to go.

“They get to us exhausted, with their phones dead and without knowing where they need to go to get picked up,” he said. "Some are miles away from where they think they are."

For those planning on parking west of MoPac on Bee Caves Road, Pryor said to look at parking-lot signage. Most local businesses will post "No parking" signs and have the authority to tow vehicles, yet others will offer parking or charge for parking at their locations, he said.

What will Rollingwood officers do to help festivalgoers?
An increased police presence will be seen on Bee Caves Road and in Rollingwood, with officers from West Lake Hills and Austin also assisting, Pryor said.

In past years, areas along Bee Caves Road have been dark, and Pryor said officers will do a better job lighting the walkway this time around. Police officers will also have water available and offer first aid to those walking through the city who need it.

With a designated drop-off location at the corner of Rollingwood Drive and Vail Street, officers will set up detours to redirect traffic away from pedestrians, Pryor said. No through traffic will be allowed on Rollingwood Drive.

What do Rollingwood residents need to do?
Parking passes are distributed to city residents to assure that cars that are legally parked in the city are not cited or towed.

“It allows us to ID the vehicles that belong in the city,” he said.

Residents should also expect heavy foot traffic throughout the city and congestion on main thoroughfares.