Fulton County Schools first announced the indefinite closure of all schools March 12, with the closure to begin March 16 and continue until further notice. After Gov. Brian Kemp issued an executive order closing all public elementary, secondary and post-secondary in Georgia from March 18-31, the FCS closure will remain in effect until at least the end of March.

To help families in need of nutritional support during this time, FCS implemented a food distribution program beginning March 16, in which amilies could drive through or pick up free meals from 11 a.m.-1 p.m. on Mondays, Wednesdays and Fridays at Lake Forest and Mimosa elementary schools; Haynes Bridge Middle School; and Tri-Cities, Banneker and Langston Hughes high schools.

However, there are still nutritional and financial gaps for some local families, said Dana Davis, the vice president for student enrichment for the AES parent teacher organization.

Davis said she, AES Principal Kathleen Stamper and other PTO members were discussing what they could do to help families in need during this time after the March 12 FCS indefinite closure announcement. They decided to raise money for grocery store gift cards to be picked up the morning of March 13, and they had about three hours to gather the funds, Davis said.
RELATED STORIES

Davis and her team raised $11,000 in a matter of hours to go toward grocery store gift cards from community members, AES teachers and beyond, which was able to assist about 30 AES families in need.

"We knew people would have holes to fill in [between what FCS offers]. Any time you go from having a kid home only from 2:30 [p.m.] to bedtime is a lot different than having them all day, snacking and eating all their meals at home," Davis said. "I just couldn't believe how much we raised. It just shows the heart of the community, the leadership of our school and the families are all invested. That kind of culture, you can't buy it."

Kimberly Wolf, president of the Webb Bridge Middle School parent-teacher association, said she felt the same. She, WBMS staff and her PTA team started a similar fundraiser and raised more than $15,000 in grocery store gift cards within three days, which helped 104 WBMS families in need. Gift cards were distributed March 18.

Donations can still be made to either organization. To donate to AES, Davis said to send donations to the AES PTO PayPal account at aespto1956@gmail.com. To donate to WBMS, visit www.wbmspta.org. 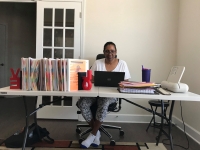 Despite the closure of all K-12 public schools for the rest of the school year, Fulton County Schools is continuing with the remote learning plan and did not cancel graduation.

Find recent local stories regarding the ongoing coronavirus pandemic below.

Initial claims for unemployment insurance rates are increasing across the nation in the midst of COVID-19. 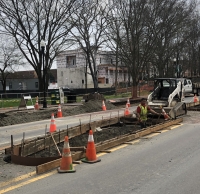 Pedestrian improvements are underway on Canton Street in downtown Alpharetta.

Shelter in place ordinance passed by Alpharetta City Council at April 1 emergency meeting, will continue for up to 30 days

Alpharetta City Council members passed an ordinance April 1, which issued an immediate shelter in place order for all city residents for the next 30 days. (Kara McIntyre/Community Impact Newspaper)

Beginning April 3, all Georgia residents will be under a statewide shelter in place order via Gov. Brian Kemp. Kemp also announced the closure of all K-12 public schools through the rest of the school year.

Residents of Alpharetta can expect to see construction on the Georgia 400 interchange at Windward Parkway completed by this fall. 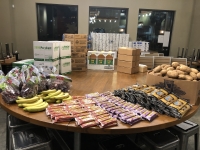